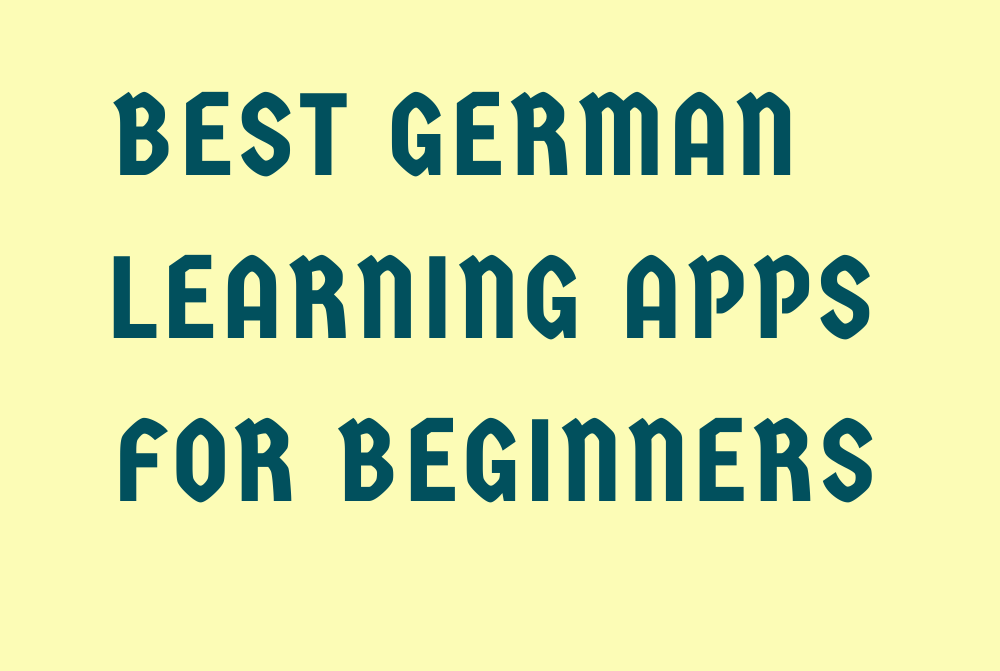 German is the one of the most speaking language in the world. In school curriculum many school in world incorporate German as their learning and development program.

German is also very tough language to speak there are many Best German learning apps for german learning available online.Not only for ios but it is available for many android application as well.

Germany is one of the most developed country in Europe. Many company especially in technology are from germany.Germany has population around 81 million .

Speaking German will be easy for user if they have proper syllabus for it. Here with the help of apps for German learning people will come to know about how German language having different level in their syllabus.

Around 130 million people across world speak german as their first language or second language.German language having three gender as widely recgnise.

Most common in between german and English is that they both shared around 60% of their vocabulary.Where as English and French having share of 27% only.

German is also most speaking language in four other country in Europe including switerzerland,luxumberg,Austria and leischestein.Also speaking most of the north Italy and French region also.

It is also third most tought language in the world. German is very systemic language to learn german you have to proper dedicated approach and immsersice cource learning towards it.

Duolingo is most popular app in the categary of german learning apps platform .It is also available for classroom . In this app you can not only learn german for with game like apperance but also learn german reading ,writing,speaking with this apps.

Duolingo is gaining popularlity among the people with interest in german . according to expert 34 hours of duolingo class is equal to 1 university semester of language course.

In this app you can earn virtual coin ,unlock new level  master with new work and grammer.Receive immediate grading after giving answers

This tailor made app is made for people who are interested to learn german review of vocabulory and excercises.

This babbel  app is best app for those people who are looking to start german and effective learn it through supplement class room material.

You can learn german here with listening ,speaking ,writing and reading german.With fast conversational with fast voice recognisition technology you will get here interective dialoges with among the peoples.

Here you will not get any support of conversation witht teacher.You get here german for all level of fucntion includign business,travelsalso learn german language to train your mind.

You can immerse in ther german culture and get complete toughter part of german language with easy learning.

This is best app in this group of german learning apps for to learn german as it provide loving approach is designed to teach children about new language.

In this German learning app you can learn new words & pharse with image and hear them in native language.

This app uses image text,video sound  to comprehend new language without translation like other apps too.

Rosetta stone also help to pronouce correct by which you can do proper pronounciation of german language.

This best german learning app designed based on graphics about animal icons sometime it looks like that this app is designed for kids in schools.

In this there are nine games provided to learn german with fun and different thems . This is best apps for school ,family and friends.

After register your name here to learn german  User have to go nin differenet games at a time.

This german leaning app is best designed for grammer .

Here you will not get chance to learng basic vocabulary but you will learn here how to arrange different word in to order in german.

This german learning app is created by expert and experience professionals and its free for users those who are willing to learn german.

In 20th century Learning German is most important aspect as this language is used language in science and technology after english.German is world wide used as professional  speaking langugae

One of the most important aspect in german learning is that there are more career oppurtunity available for you in the market after getting certification in german language.

German is also most used language in the europian union. Germany is economic powerhouse of europe.it average income is higher in the world.

By learning german language there are endless oppurtunity available for you not only in germany but around the globe.

You get oppurtunity in different segment of business like science and technolgy ,fashion ,entertainment and other business vertical after learning german language.

Compare to other famous city of the world like london and paris,Berlin is cheap stay for many of people.Berlin is called the city of liberal thinking people and cool city of europe.

If you are start up and looking accelerate you business then germany is best destination for you world most sucessful startup are from germany.

To fulfill your dream of become sucessful enterpreneur.Many of wolrd scientist leaders are from germany like max planck,Sigmund freud.

Promising career is mot important motivation for many people in the world to learn german.Many people adopt foreign language learning as german their favorite language.

Several companies have their headquater in different country and cities in the world looking for candidate expert in german .

Some of the company looking for professional german traslater interpreter, content writer in german language.

If your company looking to search for business partner with german company and trying expand their reach in europe then your skill of german learning help you to setup communication with german people and this skill is your ultimate strength for sucessful career.

As land of innovative ideas germany is also capital of many world class university and excellent reputation institurion of the world.

You can not only earn internationaly recognise degree but also betterprospect for job on the globe.

At least if you have basic level of skill to learn and speak german then if you can talk and intreact with people around you.

In Additional to best german learning apps and benefits of learning german will give you complete details how german language is important for career and business growth.