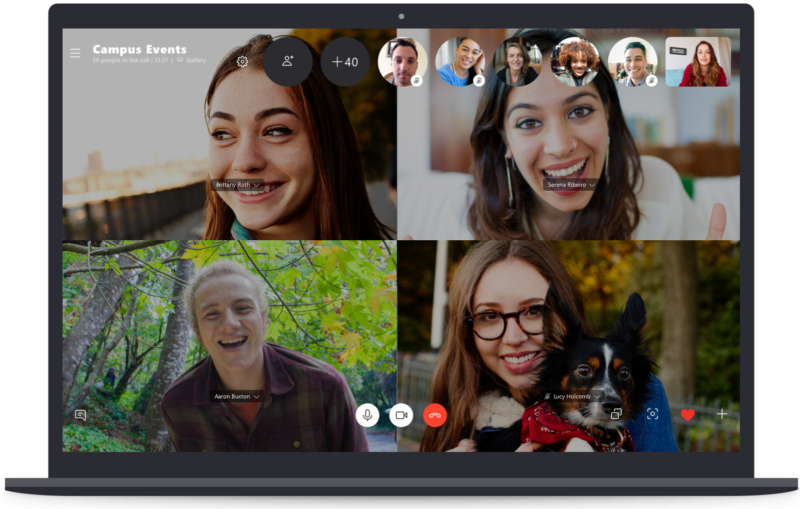 During the lockdown, Social distancing is very important to save ourselves from the pandemic. In such a situation, If you would like to stay connected with your loved ones that’s why Best Online meeting and Video calling Apps.

Then you have to download apps like Skype, Zoom, House Party with Video Conferencing but given the hacking apprehensions, the Ministry has made the Zoom Cloud Meeting insecure.

If you are looking for an alternative, then here are some of the popular video calling apps given here You can be tried.

In the time of physical distancing, video calling tools help you to connect your loved one. The special thing about video calling is that it gives the same feeling like having a face-to-face conversation

Today, whether it is one-on-one video calling or group meetings for office meetings, conferencing, online classes, it is being used everywhere. This is the reason that the downloading of these apps has also increased a lot and due to the lockdown, new features have also been added to them

Though every video calling app is equipped with some special features.  In some, the number of members in group calling is up to 100, while in some only eight.  Which of the following can be best for you here is you can select based on your requirement.

This is an application that supports cross-platform.  It has video chat support with a maximum of 50 people.  Along with this, People are using some more features like chat messages, stickers, etc. are also available.

It could use with iOS, Android, windows, and  MAC.

It is a popular conference software platform. This tool is powered by HD quality video along with a collaboration tool. This software available in free and paid both versions.

In the Free version, 100 people can do a meeting at the same time. Also, some features are there like screen sharing and personal room.

In the free version, you also get some great features like 1 GB Cloud Storage, Unlimited meetings and recording MP4 mode.

You can get option playback recording through the app while doing a meeting. It is compatible with Android, iOS, Windows and Mac OS.

Now 8 members can do video calls on WhatsApp and it also supports group calling. To Counter it competitor Zoom WhatsApp has increased their group calling member 8 from 4.

A new update has been released on the beta version, but soon the company. The company will soon release a stable version of the Beta version.

Skype is a  multiplatform video chat tool that is easy to use. There is a maximum limit of 50 members during a free video chat and for this, you do not have to spend anything like zoom and the like.

The good thing is that you can do international calling and text chat here. The calling facility of Mobile and landline also given.For that you need to take one month trial for this.

Google’s Duo is a video calling app in this Best Online meeting and Video calling Apps that comes pre-installed in the android phone. It is same as Facetime used in iPhone

Users can enjoy video calling in HD quality here. Earlier, groups could add only 8 people during video calls, but now it has been increased to 12.

Users can also take advantage of voice calls.  If the call is not able to connect with friends and family members, then there is also the facility to send personalized video messages.  It’s free and you can use it with iOS, Android, Windows, Mac, etc.

This is a special video group calling platform for gaming lovers Its specialty is that it allows streaming within the app itself.  With its help, you can play games with friends.  If a user is streaming a game, it can be connected to the whole group.

Not only this, if one user shares the game on the PC, then the rest of the users can also play it together via smartphone.  It has a limit of 10 people for video calls, while 50 people during gaming streaming.

It can also be connected with friends through text. Can be used with ios, Android, Windows, Mac.

In Best Online meeting and Video calling Apps,Video Group Calling software platform Microsoft team can be an option for business users. In a time of this pandemic crisis, it is available for free.

In its free version, 10 GB team file storage and 2 GB personal file storage is provided with unlimited chat, search, group, one-on-one audio video calling.  With this help, file sharing can also be done among the team.

If you already have an ‘Office 365’ account, then it gives you the facility of real time collaboration with office apps such as Web, Word, Excel, PowerPoint and OneNote. It  Can download for android and ios

If the user wants to do a meeting with a large group Or conference with the help of Best Online meeting and Video calling Apps, This app can be used.  Due to pandemic time, Google is giving free access to the G-suite advanced feature for a specific time.  100 member can participate in meetings during this time

Many new features have also been added to it.  Now, this tool has also been made available for Gmail users i.e. now users can also use it directly through Gmail.

With this, the gallery view i.e. tile layout has been added like a zoom app.  In this, 16 people will appear on the screen at a time.  Also, the low-light mode provided improves video calling even in low light conditions. It can be downloaded from Google Playstore.

In Best Online meeting and Video calling Apps this facetime is important, There is a limit of 32 people during the call.  It can be used only with iOS and Mac.

This is preinstalled in the apple device. Group video with 32 people in a single call calling can be done.  Along with this, it includes features like  animoji, emoji, stickers

This app is being heavily downloaded during the lockdown. It is a video chat app where video chat is available with up to 8 people.  In this user can play games like Trivia, Quick Draw, etc. can also be played with friends.

Friends who are away can connect from playing games with them. It is for iOS, Android, Mac, PC, and Google Chrome

If you want to do a video message instead of a video chat, then you can try Marco Polo. With this help, users send video messages to the individual or in a group. It can save your video message.

Fun filters and voice effects can also be used with this. It can be used for Android or IOS.

To know more about it please visit : https://www.youtube.com/watch?v=mTsjg_lIQ